This page contains the news items which were submitted in June 2020. Clicking on the title of a news message will bring you to a separate page allowing you to comment, share or rate the message. Twitter messages will also be visible here.

This week we're happy to bring you Las Venturas Playground 49!

The first big change is that Las Venturas Playground now supports both skin hit and lag shot. Skin hit will continue to be the default on our server going forward, but we'll start to support lag shot in deathmatch zones and other fighting minigames. This release introduces two DM zones in which the old school players among you can enjoy the good old days.

Furthermore, we now have live leaderboards showing which players are ruling Las Venturas Playground. Did you know that Deer_Hunter fights with 59.18% accuracy? That Ricky92 inflicts 5.14k damage an hour, or that the Anonymous Game gang is about to take over pole position from Cheap People despite having less than a third of the members? Now you do! 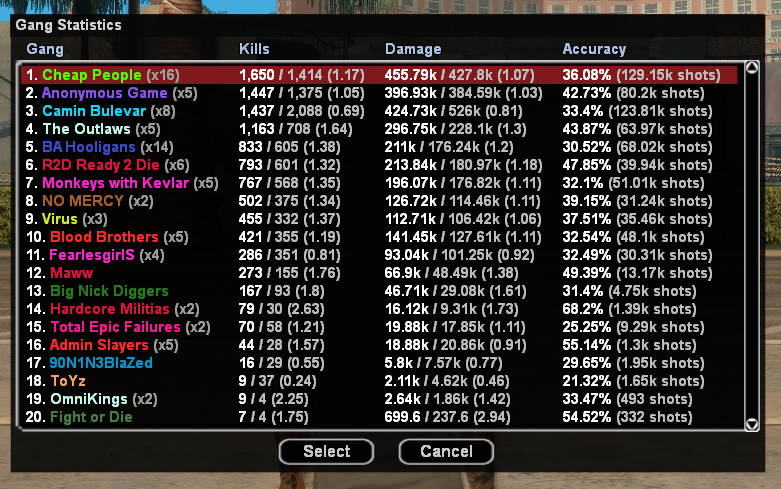 FEATURE: "/deathmatch 6", "/deathmatch 7" and "/deathmatch 9" have been added as Lag Shot zones.
FEATURE: "/deathmatch 8" and "/deathmatch 9" are new areas where you can fight in teams!
FEATURE: We now have accuracy, damage, gangs and kill leaderboards on the server!
FEATURE: Using "/q" or "/kill" while fighting will now attribute the kill to your opponent.
FEATURE: Spawn weapon management has been moved over to JavaScript. Players can now buy weapons using /my spawnweapons [weaponId] [multiplier].
FEATURE: The "/guide" command has been added for temporary administrators.
IMPROVEMENT: Using vehicle keys to flip through colours now prefers more vibrant colours.
IMPROVEMENT: The animation commands are now subject to anti-abuse regulations.
IMPROVEMENT: We now have a fancy "/animations" dialog, with the ability to click through.
IMPROVEMENT: Thousands of lines of code have been modernized, much more to follow.
IMPROVEMENT: A fully featured string formatting library has been implemented with "format()".
IMPROVEMENT: Gunther will now announce a helpful message about the leaderboards.
FIX: Administrators can now change the "muted" field of player profiles through Nuwani.
FIX: Leaving "/deathmatch" will now show the right statistics message.
FIX: Undercover players won't show up for temporary administrators in "/admins" anymore.
FIX: Houses cannot be created outside of SA-MP's pickup range (-4096, 4096) anymore.
FIX: Finding a player's aliases will now be done in a case insensitive manner.
FIX: House purchase announcements shown by Nuwani now show up properly again.
FIX: The "/ircpm" command will now be listed as one of the VIP benefits.
FIX: Administrators will now receive a notification when a player's jail time has expired.
MISC: Management members can now change a player's lag compensation mode with "/lagcompmode".
MISC: We now have the ability to control gravity individually for each player.

This release includes contributions from Russell, Holsje, Specifer and Xilent. Many thanks to Freakins, Lithirm, Beaner and Sophia for filing issues.

Finally, we have a Discord rule update: all communication in public channel must adhere to our Community Guidelines. A new "#cave" channel has been created, marked as NSFW, for those of you who want to banter a bit more, but any form of discrimination, racism and serious profanity is still prohibited.

It's time for another update! Las Venturas Playground 48 brings some existing updates, three new races, new statistics for /deathmatch and many other things.

First of all, in spirit of additional transparency, all kick and ban reasons will now be publicly shared on the server, as well as those watching on IRC. While we try out best to investigate each report, it's not always possible to explain the results of an investigation, and this might help a little bit with both transparency and accountability.

Also new is a rewritten vehicle streamer. While you hopefully won't notice too many changes, a few are worth pointing out: it's possible to tune vehicles again, and apply paintjobs and custom colours. Much of the streamer now runs on a background thread, which reduces load on the server as well.

FEATURE: Killing someone in "/deathmatch" will now grant you extra health, and new stats is being tracked.
FEATURE: The Visage Street Hustle Race has been added. Play it with "/race 39"!
FEATURE: The Los Santos Speedway Race has been added. Play it with "/race 40"!
FEATURE: The Bone Country Heat Race has been added. Play it with "/race 41"!
FEATURE: Kick and ban reasons will now be included as part of kick messages, as well as on IRC.
FEATURE: Leaving messages will now differentiate between timing out, leaving, kicks, bans and reconnects.
FEATURE: Administrators can now use a new "/whois" command in-game, and the "!whois" command through Nuwani.
FEATURE: The vehicle streamer now runs on a background thread on the server.
FEATURE: Administrators can now use "!mute", "!muted" and "!unmute" on IRC again.
IMPROVEMENT: The "/collectables" command now tells you which round you're in.
IMPROVEMENT: Temporary administrators will now be shown in a different colour when using "!players".
IMPROVEMENT: The length of repeat reaction tests can now be configured by Management members.
IMPROVEMENT: The "!serialinfo" Nuwani command will now warn about common serial numbers.
IMPROVEMENT: New locations have been added to the "/taxi" and "/tow" commands.
IMPROVEMENT: A feature was added that can change players into cows.
FIX: The bomb shop and vehicle commands are no longer available unless you have the right collectables.
FIX: The "/collectables" commands is now listed in "/cmds".
FIX: The "/v reset" command has been restricted to Management.
FIX: Achievements will now be announced to people watching through Nuwani as well.
FIX: Vehicle keys (like colour changing and jumping) are now only available to a vehicle's driver.
FIX: The "/vip" command has moved over to JavaScript, and its contents have been revised.
REMOVAL: The "/v access", "/lock" and "/unlock" commands have been removed, as they were broken for years.
REMOVAL: The "/v color" command has been removed, but we plan to bring it back, including for players.
REMOVAL: The "/v density" command has been removed, but will still be applied silently.
MISC: A Fantasy Island has been added to the map, which can be enabled by in-game Management members.
MISC: PlaygroundJS-plugin is now able to resolve DNS, and can open Web Socket connections.

This release includes changes from Russell, Holsje, Xilent, Badeend, Lithirm and Specifer. Furthermore, we'd like to thank Halo, Beaner, Sophia and Freakins for filing issues on our GitHub project.

Finally, a comprehensive network stack (docs) has been implemented in JavaScript. This won't bring anything new to you as a player right now, but it enables us to easily communicate with other servers, websites and, in the future, possibly Discord.

I'm pleased to announce the release of Las Venturas Playground 47!

The main update in this release is an overhaul of our collectables. We're introducing Red Barrels, a hundred of which have been spread out over the northern islands. They're super hazardous, so we need your help in blowing them up before they hurt anyone!

To make your life a bit easier, we introduced the "/collectables" command to see your progress, but also to provide you with the ability to purchase a hint towards the next collectable. They start of cheap, but get more expensive quickly... This command also allows you to start over with collecting Red Barrels and Spray Tags, in case you enjoy doing so.

We've also redone achievements. There are now only 13 achievements, but more of them unlock new abilities. This is something we plan to continue doing: each release will include a few new achievements, most of which will unlock something cool.

FEATURE: Red Barrels have been enabled as a new category of collectables!
FEATURE: It's now possible for people to start over again in collecting Spray Tags and Red Barrels!
FEATURE: We've implemented the Vehicle Keys feature from SAS, many thanks to iou, Lithirm and Kase!
FEATURE: People are now able to speak Swedish again. And other languages as well, of course!
FEATURE: You can now purchase hints to help you find the remaining collectables.
FEATURE: The "/gang members" command will now show you a clear dialog, including last seen times.
FEATURE: The "/collectables" command can now share instructions about what their purpose it.
FEATURE: The DFT-40 party vehicle has now been implemented in JavaScript.
FEATURE: Messages through Nuwani are now subject to our spam and message filters.
FEATURE: Administrators can now grant you the ability to use indicators on your vehicle.
FEATURE: Beta commands are gone, changing level/VIP on the staging server can now be done with "/accounts".
BALANCING: Earnings for vehicle exports have been increased by ~4x.
BALANCING: The "/boost", "/fancy" and "/flap" commands are now available to administrators.
FIX: Achievements will now be announced to everyone on the server.
FIX: Many commands have been updated to share far better usage information. (2)(3)(4)(5).
FIX: Gunther and the Plane Pilots have now been implemented in JavaScript.
FIX: Many bugs related to logging in as a guest have been fixed with a minimal change.
FIX: Storing session information of in-game players has been fixed, also fixing the website issues.
FIX: Gunther will no longer make announcements when there aren't any players ingame.
FIX: We've tried to make the "/seize" command a bit less prone to bugs.
FIX: Some temporary limitations have been added to make "/has" less prone to bugs.
FIX: Mentions won't look weird on IRC anymore, as we've removed the colours in the output there.
FIX: Using an invalid weapon Id for "/my weapon" will now display an error message.
FIX: It's no longer allowed to initiate a phone conversation with yourself.
FIX: Administrators can't remove rights from non-temporary administrators anymore. Sorry Darkfire!
WEBSITE: We've limited daily registrations per IP address to two, in an effort to combat spam.
WEBSITE: We've removed 11,481 fraudulous accounts from our database.
MISC: We now support Bézier curves in JavaScript, for more dynamic determination of e.g. prices.
MISC: We've upgraded to v8 8.5, and have enabled the Intl series of JavaScript APIs.
MISC: The Mad Dogg Mansion interior can now be assigned to houses, but is not selectable.

This release includes changes made by Russell, Specifer, Holsje and Xilent. We'd further like to call out Halo, iou and Freakins for filing issues, and, once again, iou, Lithirm and Kase for publishing the SAS gamemode!