This page contains the news items which were submitted in August 2016. Clicking on the title of a news message will bring you to a separate page allowing you to comment, share or rate the message. Twitter messages will also be visible here.

Since the beginning of our community, about 120,000 people have registered their account on Las Venturas Playground. This is an absolutely incredible number, and we're humble to be able to provide entertainment to such a large group of people.

However, such a large group of players has a downside: it's not unlikely that your nickname has already been chosen by somebody else. This could happen with cool nicknames, as well as regular first names, assigned to accounts that haven't been used in years.

When this happens, please feel free to open a topic in our Help Requests forum stating your current nickname, as well as the nickname you'd like to claim. When your request meets the following requirements, an administrator will reassign the nickname to your account.

Please keep in mind that we may refuse your request if the account belongs to a well known figure in the community, even if they've been idle for a long time.
You will not be provided with the password of the old account. We'll simply change your current account's nickname. So, kindly don't make false claims about accounts that don't belong to you, for the sake of having an old registration date, certain stats, etc.

On behalf of the Las Venturas Playground crew and Management,
Xanland

I'd like to officially announce the economic changes to align LVP's economy with the upcoming housing system.

In the live version of Las Venturas Playground very large dollar amounts are required to purchase very expensive items and properties; for example, it currently would cost $200,000 to use the /showmessage command, or $10,000,000 to change your player color as a VIP. We have reduced prices on nearly every command; for the examples above: /showmessage now costs $10,000 and VIP color changes are free.

With the reduction of prices comes the reduction of earnings- when you spawn, you will now receive $10,000 rather than $175,000. Earnings from properties have been modified in a similar way, while maintaining a nearly identical time to double the money invested in the property.

Spawn weapon prices have also been reduced to align with the rest of the new economy.

What does this all mean to you?

Your bank will show a balance no higher than $100,000,000 on next login. Your money has not been taken, it has simply been adjusted to work with the new pricing of the server.

Bounties have been adjusted at the same rate as bank accounts to align the values with the new economy.

All 2664 players indebted to the server by borrowing from the LVP Main Bank by using the /borrow command have been forgiven.

tldr; We fixed server financial problems, forget about your real life problems, come to LVP, it's like Las Vegas but fake.


On behalf of the Las Venturas Playground Management,
Joe

Insight in your most recent sessions

posted by Russell on Sunday, August the 7th at 6:16 PM

Quite recently we've begun asking players what sort of data they would like to know about their playing sessions. As a result of some really cool suggestions, today we're announcing the first use of our big data pipeline, a new piece of infrastructure we've been working on to create fancy graphs.

Detailed per-session fighting performance
Let's take a look at [TR]Death$Star's session this morning. He was online for an hour and 36 minutes, during which he killed 30 players, was killed 4 times himself and died of other reasons once. Most of his fighting occurred around the ship, but he clearly travelled around to find his victims too. 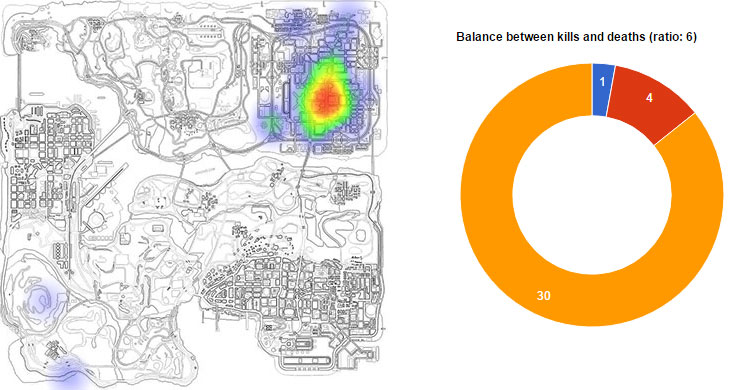 Looks pretty rad, doesn't it? There's more! His favourite weapon during this session was the Sawnoff Shotgun, with which he fired 465 times, 262 of which hit another player. That creates for an accuracy of 56%, slightly below the average of the better fighters on the server, but I'm sure that's just a fluke, right? ;)

You can find these graphs for every session played since Friday, August 5th. Just go to your profile page on the website, and you'll find a new recent sessions link in the left-hand menu. You can see the most recent sessions of all other players too!

Please continue sharing your suggestions for other cool statistics you'd like to see in the topic in the Development section. We plan to extend our gang system around this data, and create a ranking between gangs based on their in-game performance.

For now, however, please share graphs of your best performing sessions in this topic :).