Welcome to the LVP 52! This release brings SAMPCAC integration with an associated rule change, a new colour picker, and an ability for Gunther to help you translate things in-game.

First, we've been working on solidifying our support for SAMPCAC, again with much help from PwN3R_B0T. We're now at the point where we're confident in the tool, and encourage you to use it if you're often reported for or suspected of cheating. A rule change for people under suspicion is coming up: more on that in a few days.

Secondly, where you could previously pick one of 49 available colours, there's now 1,296 for you to choose from! Many variants, shades and tints have been made available through a new colour picker, hooked up with "/my color" as well as gang color settings. 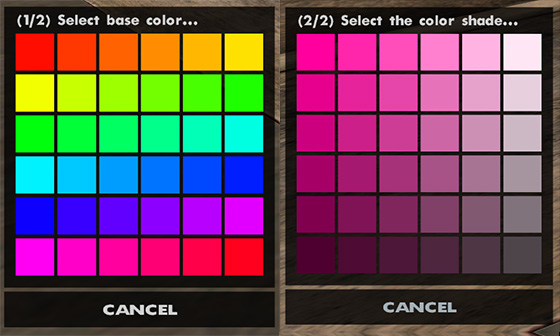 FEATURE: Gunther now has the ability to answer to a growing set of player questions.
FEATURE: Gunther now has the ability to translate text for you. He speaks 90 languages!
FEATURE: An entirely new colour picker has been implemented, with over 1,200 colours to choose from.
FEATURE: Support for various SAMPCAC detectors was implemented, again thanks to PwN3R_B0T.
FEATURE: We now have the ability to require use of SAMPCAC for specific player accounts.
FEATURE: Fighting with >100 FPS will now void the damage you inflict on other players.
FEATURE: Administrators now have access to a "/whereis" command, and "!whereis" through Nuwani.
FEATURE: Administrators now have access to a new "/scan" command, to check out suspicious players.
IMPROVEMENT: Having your vehicle shot at will now trigger our anti-abuse preventions.
IMPROVEMENT: The following /my commands moved to JavaScript: armor, color, freeze, health, hide and unfreeze.
IMPROVEMENT: Player colour management has moved to JavaScript in its entirety.
IMPROVEMENT: The "/weapons" command is now available to all players.
IMPROVEMENT: You can now slap once per seven seconds, rather than once per ten seconds.
IMPROVEMENT: Gunther will now answer calculation tests when nobody else has, sharing the answer.
IMPROVEMENT: The maximum number of connections per IP address is now configurable by Management.
FIX: It's no longer possible to spawn trains using the "/v" command. Many thanks to whoever kept trying this.
FIX: Owners of the "Large house (1)" interior will now face in the proper direction when entering their house.
FIX: Administrators are now subject to teleportation delays when using the regular commands.
FIX: Airport pickups error messages will now only show when applicable.
FIX: Non-player characters cannot be picked as cruise leaders anymore.
FIX: The "/help" command now properly explains how vehicles can be spawned.
FIX: SAMPCAC players will now be identified as such through Nuwani.
FIX: Various other updates and clarifications have been pushed to the "/help" command.
FIX: House vehicles can now be respawned with the "/v respawn" command.
FIX: It's no longer possible to jail non-player characters (e.g. bots).
FIX: In-game issued unbans will no longer be attributed to this mysterious NaN figure.
FIX: The "/showmessage" command has been removed from "/cmds" as it's been removed.
FIX: We found the cause of the 30-minute-ban-after-restart bug. It was our fault, sorry.
FIX: The "/v save" error message has been clarified to mention you need a parking lot with your house.
FIX: 0.17% of shots were wrongly being marked as out-of-range, we made the protection more lenient.
MISC: Our JavaScript plugin is now able to transform using the base64 encoding.
MISC: Our JavaScript plugin is now able to sign and verify RSA-256 signatures.

This release includes contributions from Russell, [Ds]PwN3R_B0T, Specifer, Freakins and Xilent, and had bugs filed by Finisha and Sophia. Many thanks, folks!